The Strain by Guillermo Del Toro and Chuck Hogan

Dude, I know.  I get it.  You're tired of vampires.
But hold on a sec.  These vampires aren't sexy.  They don't sparkle.  They don't engage in the teenage angst-filled equivalent of "No, you hang up the phone first.  No you."
These vampires scare.  These vampires spread.  These vampires destroy.  A lot.
I know that horror and thrillers are not the same, but in this novel, Del Toro and Hogan manage to bring horror firmly into the thriller genre (I know, I know...don't get your underwear in a bunch).  By taking the whole vampire thing into the realm of a virus (not completely new ground, but done with real panache), it creates a real-world feel to what could otherwise be just another bunch of blood suckers.
There's loads of action, tons of destruction, and plenty of saving-the-world stuff here, and I was definitely thrilled, both in the adrenaline pumping way and in the "finally, another good book" way.
Now for all you "I could take thrillers or leave them" folks, don't let either the horror or the blowing-things-up stuff scare you off.  This novel has got the kind of appeal that Outbreak did.  There's a present and growing threat that feels real.  The menace smacks you in the face without the cheese factor that you might expect out of either the horror or (okay, occasionally...I admit it) thriller genres.  You're also getting some wonderful cultural stuff from the modern day Van Helsing, Abraham Setrakian, a Holocaust survivor.
So, do yourself a favor and get that glittery image of star-crossed vampiric lovers out of your skull.  Seriously, there's no better way to do it than by reading this book!
Posted by Thriller Rock Twitter at 6:27 PM No comments:

The Hypnotist by M.J. Rose Okay, all you thriller lovers out there.  Most reviewers of this genre are overly fond of using words like "taut" and "tense", so I won't use them (as much as I'd love to).  This is the third in the Reincarnationist series, and after reading it, I'm going right to the bookstore to snatch up the other two.  Holy cow!
It reads pretty well as a stand-alone, although I'm sure I'll get more information from reading the first two.  The honest truth is, this book has got all the nail-biting, stomach twisting, I-just-have-to-read-one-more-page addictiveness that any lover of thrillers is going to want and then some.  There needs to be a category that's one step beyond page-turner.  Then this one gets put above that.  Seriously.
But what rocks about this novel is that it's got so much more than elevates it above the thriller genre...and that's from someone that loves thrillers.  It's got some history, some romance, some steamy sex, some tidbits of the paranormal.  And yet, with all that, it doesn't feel like some sort of hodgepodge homemade arts and crafts project.  It's a totally absorbing blanket of a book that wraps you up, smacks you around a bit and then lets you go...kind of.
And, of course, I've gotta give props to any woman that decides to write in what's typically a man's genre.  I've gotta give bigger props to one like Rose that knocks it out of the freakin' ballpark.
Just a little side-note for any of you readers out there that like to write as well (I know you're out there).  Take a second to go to the Indie Book Collective's website.  There's all kinds of amazing information on what you can do to get your novel out there.  Oh, and follow them on Twitter, too:  @IndieBookIBC.
Posted by Thriller Rock Twitter at 6:09 PM 2 comments:

"Marks of Cain" by Tom Knox, reviewed by @mrneil98 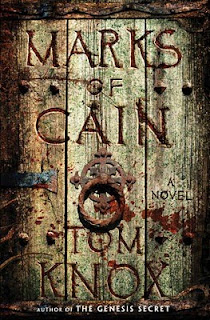 The Marks of Cain by Tom Knox
reviewed by @mrneil98


A dying request made by a destitute old man to his grandson consists of a map of the Basque Mountains in France, the name of a contact and two millions dollars if the request is carried out. This begins the adventure of lawyer David Martinez that will take him on a journey from Arizona to France and finally Africa unraveling a mystery entailing a lost tribe of pre-Caucasian people, Nazi experimentation and religious persecution ultimately revealing the secrets behind is parents death. Wow!

Then there is the parallel story of recovering alcoholic British journalist Simon Quinn investigating three grisly murders of elderly wealthy people who all were originally from the Basque region and all the victims seem to have some minor mutations. Double Wow!!


I’ve read a dozen books this summer and several have stood out but none have been as intelligent and thought provoking while delivering in the thrills department as well. While reading the last two thirds of the book I was constantly referring to an atlas or encyclopedia, following the travels of David and Simon and researching their discoveries along the way. I love books that stimulate the mind as well as increasing the heart rate with death defying chases and escapes.


Tom Knox (a former British journalist turned thriller writer) has used his investigative reporter skills to meticulously research the Cagot people and obviously has traveled extensively through the Pyrenees and Basque country. The descriptions of the villages and especially the churches, could only be from first person accounts. Mr. Knox is able to deliver the information without slowing down the action and is able also able to flesh out some interesting minor characters and develop a perplexing, complicated female companion for David. All of this adds up to a first rate thriller with something for everyone (over the age of seventeen). Fair warning, there are somewhat graphic description of the murders and more S-E-X than I normally find in these types of thrillers (not that it is overt or distracting).

After you read the novel you must visit his website which includes a ton of additional information and photo taken during his journeys. I had previously read his first novel The Genesis Secret and enjoyed it but Marks of Cain is more consistent and a superior story. I am looking forward to his third book The Severed Men, due out in England in March and the US later next year. If you need one more thrill (and who doesn’t) to extend the summer I strongly recommend Tom Knox’s The Marks of Cain.
Posted by Thriller Rock Twitter at 6:45 PM No comments: