"The Jefferson Key" by Steve Berry, reviewed by @mrneil98 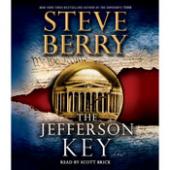 Arrrrrr mateys. Hoist the sails and batten down the hatches, we’re settin’ sail. No need to check the URL. I promise that this isn’t a review of the new Pirates of the Caribbean movie. This is ThrillersRock and this week I am reviewing The Jefferson Key by Steve Berry. This pirate infused novel is well worth the price of admission unlike a certain movie. For those of you unfamiliar with Steve Berry, he is the best selling author of ten books, seven involving the adventures of Cotton Malone, a retired government agent from the Magellan-Billet who now operates an antique bookstore in Copenhagen. Of course retirement is never really what you expect.
In The Jefferson Key, Malone is mysteriously summoned by his former boss, Stephanie Nelle, to a hotel room for a meeting only to find a remote controlled automatic weapon aimed at the President’s caravan on the street below. And that’s just page 1. The plot involves present day descendants of pirates, who are continuing their family business (with some minor updates). These privateers were given a Letter of Marque by the Founding Fathers for their assistance in the Revolutionary War until Andrew Jackson tried to stop them and hid some important information. Malone and companion Cassiopeia Vitt must solve the puzzle and uncover the truth in order to save his former boss from the pirates.
For this novel, Steve Berry has kept the action in the United States (and Canada). This allows for a fascinating exploration into pirates and their utilization in the first 100+ years of America’s history. Berry is a master at weaving historical information into his storyline without losing momentum or becoming didactic. He takes great detail in describing many locations from the Jefferson Hotel to Monticello as well as the Jefferson code and cipher wheel.
I have read all ten of Berry’s books (the Cotton Malone series in order) and this one makes the top three. The element I most enjoyed from The Jefferson Key was the introduction of Jonathan Wyatt, a colleague of Malone who botched an assignment and was ousted from the force. He has vowed vengeance on Cotton and is not only a formidable opponent but also an interesting character. For those who want an introduction to Jonathan Wyatt, Berry released an e-book short story The Devil’s Gold as a precursor to Jefferson Key (and it’s only $.99), similar to his friend James Rollins’ The Skeleton Key (see last week’s post).
What is a summer without pirates? Is there any better reading material for bringing to the beach? As a “Malone Clone“, I strongly recommend The Jefferson Key and I would gladly walk the plank for a preview of the next installment Cotton Malone series.