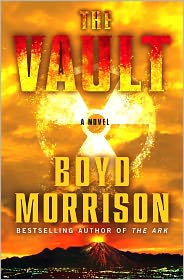 Talk about your 4th of July fireworks, Boyd Morrison’s The Vault is a non-stop action/thriller that blends technology, science, history and ancient puzzles with a race to head off impending disaster. Tyler Locke, our heroic ex-military engineer from Morrison’s debut The Ark, is back with his friend and partner, former professional wrestler turned Army Ranger turned engineer, Grant Westfield. Joining Locke and Grant is Stacy Benedict, the host of a television program on Ancient Mysteries and an expert in classic languages.
Locke’s father and Stacy’s sister have been kidnapped, forcing them to work together to solve a series of puzzles designed by Archimedes that lead to King Midas’ tomb and the true source of the legend. This trail takes them from Seattle to Italy, Germany and Greece and finally back to the US for nail-biting denouement. At first I was reticent about the introduction of Stacy as Dilara, the female protagonist of The Ark, was my favorite character. Stacy proved herself to be strong, independent and very capable in the face of the many challenges. Once again Morrison shows his ability to create powerful female characters that retain a balance of emotions and vulnerability.
The Vault is a perfect summer escape novel, filled with action and suspense but with enough history, science and technology to keep your mind sharp;  Locke, Grant and Stacy not only racing to solve the mystery of The Midas Touch to free their kidnapped loved ones but also heading off a possible terrorist attack. Morrison has proven The Ark to be just the first leg of what I hope is a long journey and The Vault is an excellent follow-up.
Unfortunately you’ll have to wait a day or so to join the fun since The Vault is being released Tuesday July 5th. I was thrilled (literally) to receive an advance copy for my review; my very first guest post was a review of the The Ark.
Morrison is an inspiration for indie writers everywhere.  Although an Industrial Engineering Ph. D. who had worked for NASA, Microsoft Xbox and RCA, he had aspirations of writing.  Morrison submitted his three manuscripts to every publisher in New York and was rejected by all. In 2009, when Amazon began allowing authors to put their unpublished works on the Kindle store, Morrison took that avenue. Within months, The Ark was a leading seller and caught the attention of a publisher. He was given a multi-book deal. In addition to The Ark and The Vault, his early novel Rogue Wave was released in paperback (and e-book) and another early novel The Adamas Blueprint will be released later this year as The Catalyst.
Happy 4th of July week! I suggest cooling off by spending some time in The Vault.
Posted by Thriller Rock Twitter at 11:25 PM