This post was inspired by two events from this week; the first was the announcement by Ray Bradbury to allow the release of Fahrenheit 451 as an e-book and the second was spending fifteen minutes every morning scraping frost off my windshield. I reflected back to this summer when I did a blog on “cold” thrillers after an especially hot week. I know it is early in what may prove to be a long, cold winter but I would like to select some thrillers to help keep out the cold. .

After eliminating dozens of “fire” titles due to the use of fire in relation to shooting a gun, I whittled the voluminous pile to my top five thrillers. While I tried to achieve the initial warming from the title, the setting of the novel was far more important to elevating the temperature of my psyche. The selection process was difficult and I had to omit classics like the aforementioned Fahrenheit 451, Richard Preston’s The Hot Zone and James Rollin’s Sandstorm. So here they are in David Letterman-esque countdown form:

5. Echo Burning by thrill master Lee Child. An earlier Jack Reacher (Number 5) set in the scorching desert with Reacher coming to the aid of a young mother who seems to be targeted by assassins. Not the best of the series but Child is an exceptional writer and he has created an iconic figure with Reacher.

4. Fever Dream by Douglas Preston and Lincoln Child. Although the title does not immediately warm your buns, the novel opens on safari in Africa with Pendergast reliving his wife’s death. The majority of the remainder of the novel is set in the bayous of Louisiana. The novel is the first of the Helen Trilogy, which was followed by Cold Vengeance this summer and will conclude with Two Graves in the summer of 2012. This is not my favorite Pendergast but it an exciting and interesting exploration into the psyche of this mysterious FBI Special Agent.

3. Catching Fire by Suzanne Collins. This is the second installment of the Hunger Games trilogy, continuing the tale of Katniss Everdeen by creating a special Games for the 75th anniversary against past champions. This book is even a little more violent than the first but the overall feel of the book is as a placeholder. The story is just a vehicle to more the plot along to the ultimate showdown in Mockingjay. If I did not have the third episode already on my Nook I would have been angry at the conclusion of Fire.

2. Ark of Fire by C. M. Palov. This impressive first novel by Palov is a thriller involving a race for the Ark of the Covenant pairing American photographer Edie Miller and British historian and former Special Agent Caedmon Aisquith. The action, pacing and historical information is reminiscent of James Rollins and Steve Berry and just as rewarding. 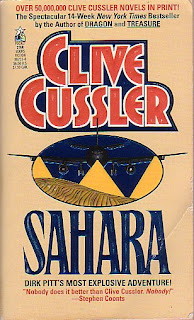 1. Sahara by Clive Cussler. This is my favorite Cussler adventure and featured Dirk Pitt. Any novel that begins with the South kidnapping Lincoln on an iron-clad ship has you hooked right in the beginning. You can tell that Cussler had as much fun writing the book as the reader has reading it. He even wrote himself into the book as a character. The discoveries made along the way fit into the flow of the action even as far-fetched as they may be.

There are so many hot thrillers to heat your chilly winter nights but I recommend losing yourself in one of these scorching titles. What are some of your favorites that I may have missed?
Posted by Thriller Rock Twitter at 4:16 PM