Asylum Lake by R. A. Evans

Asylum Lake (Parting the Veil) by R. A. Evans is a gripping, fast-paced thriller that left me with chills. Unfortunately, problematic flashbacks, spelling errors, and poor formatting undermined the tense plot and eerie setting.


In early 1970’s, a series of gruesome murders rocks the quiet, little town of Bedlam Falls, Michigan. But what’s even more disturbing than these terrible crimes is the fact that the perpetrator is a twelve-year-old son of a respected minister. The town, knowing that the culprit has been locked away, breathes a sigh of relief until thirty years later when the horrible acts are played out once more. Now, news reporter Brady Tanner stumbles across some disturbing family history that may help solve these mysteries and end the cycle of horror.

For the most part, I found this book to be entirely absorbing. At times, Evans’s writing leaves the reader breathless. Some events, such as the graphic murder sequences, left images in my mind that will not soon be erased. Other scenes, such as a time in which a foursome of teenagers decided to go for a nighttime swim, were wonderfully tense.

But not every scene is so well rendered. Clunky back story mangles the opening chapters of the book, and further on, the flashbacks are so poorly handled that it can be confusing to know what happens when. Also, there are many formatting troubles including such things as oddly-indented paragraphs and strangely-placed chapter headings.

Asylum Lake is the first in a series of books by R.A. Evans. It is a good first attempt by this author, but I hope that some of the problems with flashbacks and formatting will be fixed in the next books. 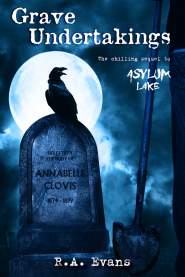