For those thriller fans going through withdrawal since the release of Rollins’ The Devil Colony and Berry’s The Jefferson Key early this summer, I offer an alternative from across the pond. I have been enjoying the novels of several British authors over the last five years whose style and subject matter is consistent with the works of Berry, Rollins and Dan Brown. They are my Fab Four. 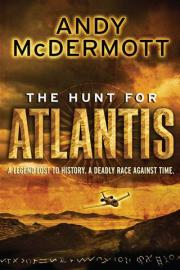 First up is Andy McDermott, the most prolific of the quintet. His debut, The Hunt for Atlantis, introduced his two recurring characters, Dr. Nina Wilde and Eddie Chase. Dr. Wilde is an American archeologist who continues to seek and solve many of the world’s greatest mysteries. Eddie Chase was hired originally as a bodyguard but their relationship has changed dramatically (and romantically) over the seven novels. McDermott’s novels are an entertaining diversion, reminding me of Matthew Reilly’s works.

David Gibbins is a writer who uses his educational background, a PhD in Archeology from Cambridge, to create believable scenarios and add credible historical background to his thrillers. His debut, Altantis, introduced his recurring cast of characters lead by Jack Howard, a marine archeologist, who is now beginning his sixth adventure. Gibbins books contain an excellent balance between historical background and modern day espionage. 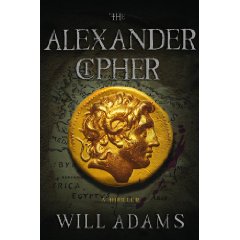 Will Adams is the author of four thriller’s featuring archeologist Daniel Knox. His debut was The Alexander Cipher, followed by the superior Exodus Quest. Adams’ mixes historical knowledge with his own creative possibilities to create plausible storylines involving many of the world’s mysteries including Alexander the Great, Moses, Minos and Eden. (Note: Beware the changes in title from the original British to the American release name, i.e. The Exodus Quest becomes The Moses Quest.)

Last of the Fab Four is Tom Knox, not to be confused with Adams’ character Dan Knox. Knox is the nom de plume of British journalist Sean Thomas, who differs from the other authors by not involving recurring characters. Each of his first three thrillers create unique central characters and thrust them into life altering, as well as life threatening, situations. His debut The Genesis Secret dealt with fascinating findings in the oldest known settlements of Gobekli Tepe. Knox’s second The Marks of Cain was even better and truly demonstrated the incredible research that he conducts for each of his novels. I have been following him on Twitter @Thomas Knox and he has been documenting his excursions for his fourth and fifth books.
To fill the void until the next Rollins (summer 2012) or Berry (next Cotton Malone not until 2013!), you might want to try one of these British thriller writers. They educate with historical information while they thrill creating likeable characters thrust into death defying situations.

NOTE: I was originally going to review David Baldacci’s new thriller Zero Day but could not bring myself to pay $14.99 for the e-book on my Nook. The price crossed the line in my opinion. There are far too many books priced at less than one third the cost providing nearly as much entertainment. I almost balked when The Jefferson Key was $12.99 but in the end I caved. Not this time, especially since it is not an Oliver Stone and the Camel Club adventure.
Posted by Thriller Rock Twitter at 12:03 PM