Crossing Over - An Idea Whose Time Has Come

Happy Halloween! I hope you all took my advice and purchased All Hallow’s Eve by @crafty for $.99 during the Bestseller For A Day. Remember to keep the lights on while you’re reading. This week I would like to use M. J. Rose’s In Session as an inspiration to other writers wishing to use their established characters as a medium for cross-promotion. 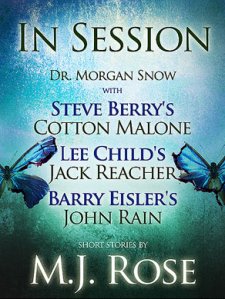 In Session is an e-short story utilizing Rose’s recurring character of sex therapist Dr. Morgan Snow in three vignettes featuring three macho thriller stars in unlikely, and often vulnerable situations. The first story, Extenuating Circumstances, uses Steve Berry’s Cotton Malone in an interesting exploration into Cotton’s past and possible reason for his unstable relationships. Ms. Rose is obviously a fan (and friend) of Berry’s and has believably journeyed into Malone psyche although I believe Cotton should have seen through the subterfuge.


The second story explores Lee Child’s Jack Reacher, a character many of the readers of this best selling series would love to know in further depth. Reacher saves Dr. Snow from a bombing in her building but not before baring quite a bit of himself.

The third story involves Barry Eisler’s John Rain. Although I am not familiar with this character, his actions seem natural and consistent with the style of action oriented male persona central to these books.

In Session is a very entertaining and enjoyable read for only $1.99 but the main reason for the blog is to encourage other authors to “crossover”. One of the last shows I used to watch regularly was Buffy the Vampire Slayer, which would regularly have episodes where it crossed over with Angel. Author can use this same concept, as M.J. Rose has, to use their fan base to expose readers to new authors and their characters and visa versa.

This has been done on a very small scale by Steve Berry, James Rollins, Brad Thor and Raymond Khoury. Berry has shouted out Thor’s Scott Harvath, Rollins gave Cotton Malone an anonymous nod in The Black Order, as did Khoury in The Templar Salvation. Berry has in turn mentioned Rollins’ Sigma Force but now it is time to take it to the next level!

Already there is discussion on twitter and face book of a Rollins/Berry collaborative e-short story involving one of each of their characters. This should just be the first step. The ITW (International Thrillers Writers) is a tight knit group and the potential for cross promotion cannot be denied. There are numerous Reacher Creatures who have not yet become Malone Clones. How about an ex-Seal Team Sixer joining Sigma for an adventure (Mr. Thor and Mr. Rollins?). Or may The Chess Team (Jeremy Robinson) joining forces with Tyler Locke (Boyd Morrison). Lets get this done!
Posted by Thriller Rock Twitter at 6:07 PM