Our Friday Review - June 22nd CIty Under the Moon 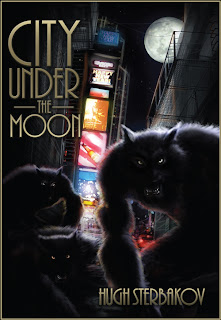 City Under the Moon by Hugh Sterbakov

Assisted by a horror blogger and a squad of elite commandos, Tildascow must hunt Valenkov across the globe and uncover the sinister secret of the curse threatening mankind. Tens of thousands are infected. Time is running out.

I really never imagined I'd be writing this in a review: It's the werewolf apocalypse! This story is a very unique thriller that returns the werewolf firmly to the role of monster. For me, this was a welcome change from the recent trend in popular fiction where the werewolf is cast as more of a tortured romantic hero, doomed or otherwise. I also enjoyed the shake up from the hordes of undead leading us to our peril thing - although humanity meeting its end at the shredding hands (claws) of a hairy wolf-like human might not be much of a step up.


From start to finish, the werewolf infection in this story is terrifying. The creatures are nothing but driven killers, cannibals really, controlled by a single leader. They live to eat, kill and spread the infection. To become a werewolf is a fate worse than death.

And of course, that is the fate facing New York city.

As the potential doom of mankind - the werewolf plague - descends on the city; it soon becomes clear that options are limited.The madman behind the plague is demanding a cure from the U.S. government. But is a cure even possible? Will the government attempt to find a cure or will it take far more drastic measures? The author does a remarkable job of creating suspense throughout the novel, particularly at the end. There are a number of possible outcomes for the reader to guess at that pop up along the way.

For many thriller fans, this will be a great read. There are plenty of heart racing action sequences to keep the reader glued to the pages. There is a variety of character types - from a geeky young werewolf expert to an atypical FBI anti-terrorism specialist that is something of a science experiment herself. The novel even takes on different sub genres: at times it can be anything from medical to political thriller, science fiction and horror suspense to historical fiction.

I think this thriller will be a five star book for many action horror fans. For me however, there were some very significant things holding me back. I did find myself having to go over a couple of passages to re-read some of the action, and I did get a little lost in the middle. It could just be me and other readers might not experience this. My other, more subjective stumbling block was the writing style. Course language can be used effectively and in the case of this novel it's used well with humor. But for me, less is often more and it did take away from my overall enjoyment of the book. Although, I think it would work well as a movie.

Available for purchase on Amazon.