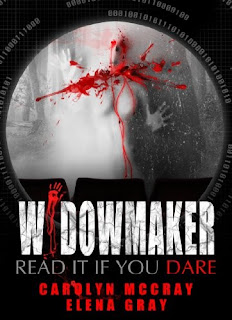 If you're ready for a good scare but it's not quite hot enough where you live to seek out the cool dank atmosphere of a movie theater, here's a great place to start: Widowmaker: A Thriller for Horror Buffs by Carolyn McCray and Elena Gray. This was a great fun read that starts with an idea that's been around before - a movie that can kill - but then twists itself into something altogether original and entertaining. Here's the story blurb from Amazon:

Terror in the Trees, the latest uber-low budget slasher flick is slaying people... literally. But is it all hype or is there an evil force behind the supposed deaths? Special Agent Bolder had best find out before the President attends the Hollywood premiere...

The blurb really doesn't do the story justice. There's just so much more to it. It has all the elements of a campy horror movie mixed with well developed believable characters, humor, nail biting suspense, conspiracy and a completely unpredictable ending. The story wasn't the only part of the novel with such a surprise ending either; the endings for several characters were highly creative (and of course, sometimes rather gory). But getting back to the ending - wow. I really couldn't have predicted that one.

When it comes to horror suspense novels, there's very little to complain about in this one. I recommend it. Particularly if you're a horror movie fan looking for something a little unexpected. The pace is fast. The characters are fun (Mitchell was my favorite). A lot of characters die, including some of the more appealing ones. But yes, I will admit that the Baxter brothers are kind of two dimensional as far as characters go - it just makes them fit the story better.

I first read this novel back in January and the copy I had was an earlier version that had formatting issues on my reader. In places it was difficult to read. I am happy to say that this updated linked version doesn't share those issues. It's a very good deal at its current price of $0.99 on Amazon, but I would pay more and feel it was money well spent. Five stars.