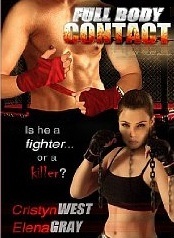 Full Body Contact by Carolyn McCray and Elena Gray is action rich romance with plenty of grit and suspense. Although it's touted as a thriller by many reviewers, I'm reluctant to throw that label around without the romance firmly affixed. Why? After finishing the novel, I felt the characters' relationships and psychology played a much larger part than the criminal investigation plot. Much of the suspense and most of the thrills arise from the dangerous relationship between the main characters Detective Alexis Reed and prime suspect Travis Dekker. This is in no way a negative. I just feel that simply calling it a thriller might not leave it open enough for other audiences.

Travis Dekker is a prize winning Mixed Martial Arts (MMA) champion and the prime suspect in the violent death of his girlfriend as well as others. Damaged by his reputation for losing control in the ring (and possibly during other violent activities), he no longer competes. Instead, he operates a gym to train future hopefuls.

As the only detective with some MMA training, Alexis Reed is the best choice in her unit to investigate Dekker. While her coworkers Nick and Grace are both seasoned detectives, Alexis has the right look and experience to go undercover as Dekker's student. Neither of her colleagues are happy with the choice, Nick in particular. Having dated her, he's become protective which makes Alexis uncomfortable. But the girl detective is driven. She's had to work hard to get where she is and won't miss out on the opportunity.

Almost immediately Alexis ('Lexie') gets caught up in Dekker's dangerous nature. She discovers she's attracted to his danger and begins to take extraordinary risks and rationalize Dekker's behavior. As her desire for the suspect escalates so does her own risk taking. Will her naïveté and inexperience jeopardize her investigation or lead her into something much worse?

Shorter than most novels but longer than a 'single', this is a good quick read. It's the perfect length for those times you crave a read but can't invest a lot of time - like during a road trip or air travel. Although the sex does get very steamy, so if you're a blusher, maybe not. Save it for the hotel room.

For the romance part of the story, I would have preferred the ending to be a little longer. It also might have been nice to see a little more tension between the Alexis and Nick characters. I felt that relationship could have been fleshed out more (no pun intended) and it could have added a little more depth to the story depending on how it was tackled. However, as a quick light read it doesn't really need anything else, so I've reviewed it that way.

As a thriller, the action is tough and the fight scenes brutal. There's enough going on to keep the reader engaged and scrolling through pages right up until the end. All in all, it's a tidy little romantic thriller or thrilling romance - your choice - worth the cover price. So if you like your romances with kick or your thrillers with heat, this could be the novel for you.