"One for the Money" by Janet Evanovich

"There are some men who enter a woman's life and screw it up forever. Joseph Morelli did this to me -- not forever, but periodically."  Right from this opening line, you kinda can't help but feel for the tough, flawed and utterly charming Jersey girl, Stephanie Plum.  This quirky mystery, set against a backdrop of the connected and not-so-connected, introduces us to a character that was compelling enough to demand a series of novels...not to mention a film deal with Katherine Heigl playing the lead.

There's more character work and slightly less action that most thriller readers look for, but the humor added to the suspense of the mystery involved should keep all but the most hardcore thriller readers entertained.  Plus, let's face it, we all need to branch out from time to time, right?  This heroine is gutsy enough to impress the women and sexy enough to keep the men intrigued.  And while the characters practically reek of Jersey flair (replete with dialects), they don't keep the action from moving along.

For those not-so-much-with-the-thrillers readers out there, the heroine alone is enough to keep you going here.  Then there's the cast of just-off-the-sterotype toughs and Italian mothers and guys those mothers keep trying to set their daughters up with, which provides plenty of opportunities for off-beat humor that will make you laugh out loud.  Add to that a sexy ex-flame who may or may not be guilty but is certainly bad, and you've got a novel that'll keep you up to the wee hours of the morning.

This is a novel that definitely deserves a read, and since the film's due out next July, you've got plenty of time to build up your anticipation.
Posted by Thriller Rock Twitter at 6:02 PM No comments:

Pirates!  We love pirates, right?  Whether they look like Johnny Depp or Orlando Bloom, they've got rugged charm and great accents.

We are not talking about those kind of pirates here.  In Deep Six, Mark Powell has crafted a tale that takes us into the brutal world of modern-day Somalian pirates and the over-privileged, ennui-filled civilians that are recruited to kill them.

This is Powell's second Mark McCabe novel, the first being Quantum Breach.  McCabe is ex-SAS, an ex-banker, heavy on the charm and masculinity with a penchant for getting himself into some extremely adrenaline-pumping situations.

The writing is straightforward, open and honest, although at times it feels as if Powell doesn't completely trust his reader enough and resorts to over explanation.  The only other observation is that Powell will occasionally switch perspectives mid-chapter which can be jarring.  However, the characters are engaging, which, when added to the gripping action, can make for a compelling read.

If you were a fan of Quantum Breach, you will find Deep Six an improvement on a promising series, instead of the occasional dreaded sophomore slump.  We revisit some old characters we love (and love to hate) and the back-story is further fleshed out.  McCabe is definitely a character worth revolving a story around.

If Powell is new to you, you should give this author a try.  The fact that he's drawing from his own military (and financial) background lends a truthfulness to his story lines that's exciting.  The novel is filled with deeply flawed human beings that Powell wisely refrains from psychoanalyzing.  The Somalian pirates and their hierarchy is fascinating and topical, giving this novel a very up-to-date feel.

Take some time to check this promising new-ish writing talent out!
Posted by Thriller Rock Twitter at 6:15 PM 1 comment: 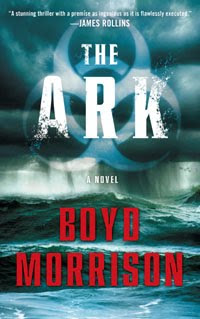 
Posted by Thriller Rock Twitter at 8:53 AM No comments:

For The Hunger Games, we've asked Ben Hopkin (@actingnodrama) to guest review.  Ben is an actor, a producer and also a writer, so is bringing a slightly different perspective to things.  'Cause you know, at @ThrillersRockT, we like to shake things up a bit!

The Hunger Games, by Suzanne Collins, is up for review this week.  Yeah, yeah, yeah, I know.  What the bleepedy-bleep-bleep is a Young Adult novel doing getting reviewed on Thrillers Rock Twitter?  Well, here’s the thing.  It's a YA novel, but really there's nothing stereotypically YA about it.
And while it isn't classified as a traditional thriller, it is well... thrilling.  And I mean, shouldn't that be the basis for deciding if a book is truly a thriller?  And trust me this  is an absolutely, positively adrenaline-pumping, page-turning, hair-raising piece of work.

What The Hunger Games also has is a superbly crafted plot, razors-edge-sharp characters and plenty of emotional resonance.

But what elevates this novel is the clarity of its characters.  Every character I encountered, even briefly, in this book was given three dimensions.  There are characters in this book that I miss right now because I'm not currently reading it.  I'm not going to spend much more time talking about the story or the people within it, but I will just throw out one name for you.  Cinna, the stylist.  When you read The Hunger Games (as you really MUST), keep him in mind.

As an actor, my litmus test for characters is whether or not I would want to play them (yes, even the female characters... What can I say? Actors are weird), and I can honestly say that it would be an honor to play any of them.  Especially Cinna.  In case it's in development.  And those casting are reading this blog.  #justsayin

Okay, disregarding that little self-promoting sidestep... It's the combination of the tight-as-a-drum plot and the crystalline-clear-as-snow-melt characters gives Hunger Games an honesty and emotional through-line that I've rarely felt in another author.  When a writer can evoke an epic quality and at the same time ground the sweeping action in believable and lovable characters, magic happens.
Oh, there's one more thing, just in case all of the preceding rambling wasn't enough to convince you.  The Hunger Games is the first in a trilogy.  Catching Fire is the second, and Mockingjay, the final installment, is due out on August 24th.  If you're at all like me, you'll get to the end of this novel and be intensely grateful for that fact.
Finally, I want to thank @ThrillersRockT for the chance to guest review this week.  Not only because I get to review alongside some awesome writers, but because the novel I'm reviewing was good enough to keep me up until 3 am to finish it.  I also believe there may have been a skipped meal or two in there as well, and for anyone that knows me, that's a big stinkin' deal.

Just as we asked why guys would want to read "Hunger Games" we ask why should chicks want to read "Mind Walker?" Because let's face it, most guys are going to automatically dig this book.

As always we don't give spoilers here but oh how I would want to. Somehow Roy has managed to create a taut, page-turning thriller with just a twist that is sure to surprise.

Also, I find that we girls also really enjoy a story with rich settings and exotic locations.  Mind Walker takes us on ride across continents that you won't want to end!

So give this indie author a chance to rock your world!

How about you friend him on GoodReads

And check out his book on Amazon

Don't forget that Plain Jane is also out.  A Patterson-style thriller that harkens back to the "Kiss the Girl" days with a slash of Harris' macabre.
You should read 50 pages for free here.
And if you decide to buy the entire book, here is a 50% off coupon: RH88E

Thanks so much!
Posted by Thriller Rock Twitter at 9:04 AM No comments: