"The Informationist: A Thriller" by Taylor Stevens (@Taylor_Stevens) 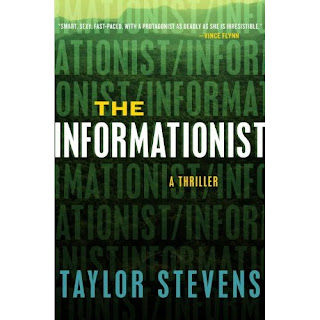 The past few reviews I've done have been of well-established writers with long series under their belts.  It's always nice to come across a new-to-you author that has a significant back-list.  However, there is no greater thrill (if you'll pardon the rather obvious pun) than finding a brand new talent.  And wow, is Stevens a talent.

If you like your thrillers filled with thrills (let's see how many times I can use a variation of the word "thriller" in one posting), this one will be more than enough to... thrill you.  The pacing is tight and fast, the action is enough to make your temples throb in time with your heartbeat and once you start the sucker, there's very little chance you'll get your nose out for anything less than a four-alarm fire.  As far as I'm concerned that's the thriller triumvirate.

For everyone else, you need to read this for an amazing new writing talent.  What really struck me, especially in a first novel, was the depth of characterization and complexity of the prose.  The richness with which she depicts Africa... the place, the culture, the feel of it... almost defies description.  This is another one of those rare thrillers that elevates the genre.  If there was ever a thriller for to check out, this is the one.

This is a new author to take a risk on.  And it's not much of a risk.  Just read the other reviews.  You can check them out (plus buy a copy) by going here.
Posted by Thriller Rock Twitter at 5:50 PM No comments:

Once more, the joy of reviewing a book that's not only excellent, but WELL into its series.  This is the 20th in the Lucas Davenport Mysteries, and if this novel's any indication, there won't be an end any time soon.  I know lots of readers and reviewers take umbrage with those authors who churn out novel after novel in a series, but honestly, I LOVE it (as long as they continue to be good).  I love revisiting familiar characters, seeing newly developing situations and developments between them, fresh characters popping in to shake things up.  To me it's like revisiting an old friend.

I can't say that's the case here, as this is the first of the Davenport books I've read, but this one makes me want to go and start from the very beginning, and in a series with 20 books, that's as high a recommendation as I know how to give.

For you thrill a minute reader-types (you know who you are), this novel will definitely do it for you.  There's no shortage of action and tight plotting here.  You will be swept along for the ride, only realizing later that this is better than average stuff.  It's the kind of stuff that sticks with you after you close the book and put it away.

And right there is the recommendation that you I-could-take-'em-or-leave-'em thriller types need.  The characters are sharply and skillfully depicted, the dialogue's like silk and the action's BELIEVABLE (I know, right?).  This is the series that could change your mind about the whole genre!

So, give it a try.  Take it for a test ride.  What's the worst that could happen?  You already don't like thrillers, right?  And the best-case scenario?  You've found another author to love, with many, many novels in front of you before you exit the series.

As for you thriller lovers... you know what to do.  If Sandford's new to you, Storm Prey's an excellent foray into his world.  You can grab a copy here.
Posted by Thriller Rock Twitter at 4:12 PM 4 comments:

"Treachery in Death" by J.D. Robb

Once you've told as many stories as J.D. Robb has, you probably know your way around a tale pretty well.  This is like the 32nd or 33rd novel in the series, which is still going amazingly strong (if this particular installment is any indication).  That's a LOT of novels!  And to have the same characters (the In Death series centers around Eve Dallas, a Lieutenant for the NYPD, set in the near future) throughout but still be this tight is nothing short of phenomenal.

This entry is not, truly speaking, a mystery, as we know whodunnit right from the start, but the tension and thrills mount as the team tries to put together an airtight case.  Lt. Eve Dallas is a compelling character to build a series around (clearly... 30-some-odd-novels!) and leads a team of equally interesting personalities.  The plotting is airtight, the prose zips along, the dialogue is believable and specific.  In short, this novel has everything a thriller reader could ask for.

For the rest of you out there, this reasons for reading this novel center around the fact that Robb has put together such a long-running and successful run of books.  She knows what she's doing.  It's the adrenaline fueled world of thrillers with the feminine touch, which I've truly come to appreciate.  A strong and integrity-filled heroine at the helm matching wits against another female cop at the other end of the spectrum is enjoyable.  Another aspect of this novel that might appeal is the "sting" that's set up within the boundaries of what might otherwise seem like a typical police procedural.  It's fun and ultimately very satisfying to make your way through this one.

So, if you're a thriller reader that likes the procedurals, this one is a must-have.  If you're new to the genre, or even a little leery or jaded, give it a try.  If you enjoy it, there's another 30 or so out there for you to read!  You can get Treachery in Death here.

Also, for any of you authors out there (or readers who like to keep up with publishing trends), you have to go check out Carolyn McCray's (@craftycmc and @writingnodrama) article on how to sell your books on Amazon.com.  It was just published on Digital Book World's site, right here.  Congratulations, Carolyn!  Amazing article!
Posted by Thriller Rock Twitter at 4:47 PM No comments:

Yes, indeedy!  It's time to go back in time a bit.  The release of Excavation in hardback was too much of an excuse for me not to!  We're going back to almost the beginning of Rollins' career as a thriller writer.  Excavation was his sophomore novel, but there was no slump here.  If anything, Rollins cleaned up his style and his prose from his first, Subterranean.  The plot's intricate, with tons of intrigue and excitement, plus the too-strange-to-be-fiction stuff that we've come to love so much from Rollins' later work.

If you're a thriller reader and you aren't reading Rollins, honestly, there's no excuse.  His work, in my humble opinion, rivals or even surpasses many of the greats out there (Cussler, Brown, Thor).  His impeccable research, his tight plots, his sharp dialogue...they were excellent to start with (as you can see in this earlier gem), but have only continued to improve with his succeeding novels.  This one's got it all:  history, Incan legends, secret societies, plus thrills galore.  If you haven't read it, now's the perfect time!

For those of you not too keen on thrillers, Rollins manages to infuse a certain sensitivity into his writing.  Yes, lots of things go "boom", but there is real character development and Rollins has a tendency to write strong women to go head-to-head with the more testosterone-driven in the bunch.  He likes to turn things on their ear, taking them away from the thriller stereotypes we've all seen ad nauseum, ad infinitum.

So, if you're already familiar with Excavation, hopefully this trip down memory lane will make you want to pick it up again.  If you aren't (or even if you are), you can pick up the newly released hardback version here.
Posted by Thriller Rock Twitter at 5:13 PM No comments: