I had eagerly anticipated the release of Micro since reading that the incomplete manuscript would be complete by Richard Preston, author of The Hot Zone.  After an initial rebuff due to an excessive initial list price of $14.99, I patiently bided my time waiting for my turn through my local library. I am so glad that I was able to delay my immediate gratification and wait for a free copy. 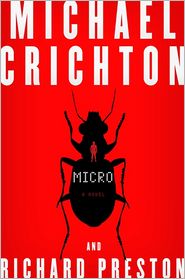 I had read the first 20 pages with a free sample on my Nook, so I quickly reread the beginning and poured into the rest. The set up was engaging, with an excellent combination of technology, humanity and industrial intrigue. There were mysterious attacks by invisible assailants, a powerful new high-tech company recruiting elite grad students and several curious deaths and disappearances.
Unfortunately, one third of the way through the book, the plot took an unexpected and unbelievable twist. For most thrillers, the reader must suspend reality and buy into the premise proposed by the author. For some reason I just couldn't get past this sudden turn of events. Maybe I watched Grant Williams too often as the Incredible Shrinking Man or remembered my sleepless nights with early morning viewings of Dr. Cyclops. All I could think of while reading the second half was my alternate title, Honey,  I shrunk the graduate students. Although Micro is filled with an enormous amount of scientific information concerning rainforest denizens, it felt like a journey through a universal studio set. 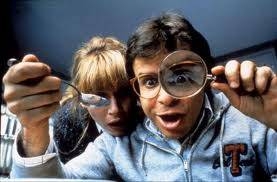 Micro is a well-written, engrossing thriller that surprised me with several of the twists that occurred. If you can truly buy into the premise, then this will be quite a ride, but I was left wondering what Micro could have been if it were left as an exploration of the uses and abuses of micro bots and nano bots on the national and international political stage.
Posted by Thriller Rock Twitter at 5:56 PM 2 comments:

Last January, Preston and Child took a huge gamble. After ten best-selling Pendergast novels, he duo introduced a new character, Gideon Crew. The first installment was not up to their high standards and seemed to be a set-up for future books. There was an investigation and plenty of action but over all the book had the feel of a back story. By the end, I was questioning their decision to create a new series.  The good news is that they didn’t listen to me. 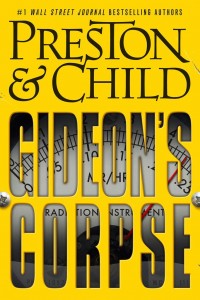 Gideon’s Corpse is a huge scale, action-packed thrill ride. From the opening, where a former co-worker of Gideon’s holds a family hostage in a New York apartment building to the nerve wracking conclusion, everything in this novel is grander. There are chases through canyons, an emergency landing of sabotaged plane, pyrotechnics and even a sword fight with chainsaws. Through it all, the novel is about an unwilling hero thrust into a situation not of his making. There are many parallels between Gideon and the protagonist of most Hitchcock films.
For those Pendergast fans, don’t fear for there is another Pendergast currently at the publisher and another being written presently. I had the pleasure of attending Preston and Child’s book-signing at Barnes and Noble in Princeton, NJ. They have a wonderful relationship, poking fun at each other while discussing the book, the writing process and fielding questions from the audience. 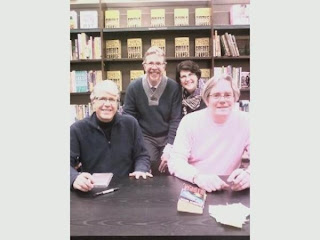 Some of the tidbits that they shared include:
-         The new Pendergast book, Two Graves, will be released this December.
-         The next Pendergast, I believe they said the title is Bane, will focus on Corrie Swanson.
-         Michael Bay owns the rights for Gideon Crew and is planning a film.
-         They write their books 2000 miles apart, using e-mail as a major source of communication.
-         Their title for the new Pendergast book, Two Graves, was suggested by fans during a Facebook contest.
-         Lincoln Child has a new solo book, Third Gate, coming out in May while Doug Preston is writing the introduction to a book on the Amanda Knox case.
If you get the chance to see them on their tour, take advantage. They are entertaining and informative. At the majority of the remaining stop, Doug will be there in person and Lincoln will be there via Skype. If you can’t see them, make sure to pick up Gideon’s Corpse. It is a great start to what will hopefully be a thrilling year.
Posted by Thriller Rock Twitter at 10:18 AM No comments:

The end of 2011 brought many pleasant memories of books gone by and some technological issues, hence the untimely post. Looking back to 2011, there were many thrilling reads, some from this year and some from past years that I had overlooked. I will limit my selections to books released during 2011 and divide them into mainstream and indie.

3. The Vault by Boyd Morrison – While it may be a tad inferior to The Ark, The Vault is a thrilling mixture of history, science, action and intrigue. Continuing the adventures of Tyler Locke and his former pro-wrestler/army ranger Grant Westfield, Morrison creates an intriguing tale involving a search for King Midas’ tomb and the ultimate secret of his golden touch.

2. The Jefferson Key by Steve Berry – Cotton Malone begins by stumbling on to a plot to assassinate the President and winds up battling pirates off the Eastern seaboard. Steve Berry mixes historical fact with current economic unrest to create an entertaining read. The book was enhanced by an e-short story released before the novel that gave essential background to one of the new characters. This is not the first time Berry has done this and several other authors have followed suit including David Baldacci and my next pick, James Rollins.

1. The Devil Colony by James Rollins – The new Sigma adventure is centered mostly in the US for a change and involves Native Americans, Mormons and secrets of the founding of America. While the action is intense and seemingly nonstop, the historical references kept me just as interested. This novel was preceded by an engrossing e-short story involving Seichan and the Paris underground.

Indie Top Three:
Great year for indie authors, as next year proves to be even better. Tough choice with many falling just short like New World Orders by Edward G. Talbot and Quick Kill by Patricia McCallum, but here are the top three:

3. The Ninth District by Doug Dorow – Dorow uses his knowledge of his home environment, Minneapolis, Minnesota, too create a tense robbery caper involving FBI Special Investigator Jack Miller. This is the beginning of what I believe will be many thrilling endeavors by Dorow.

2. Petroplague by Amy Rogers – This tense science-based thriller will enthrall the Crichton fans and surprise the Rollins fans with a mixture of scientific background blended seamlessly into a story involving a doctoral student and her relationship with her kid sister. The world hangs in the balance, but we wouldn’t care if we didn’t care about the characters.

3. 30 Pieces of Silver by Carolyn McCray – This is a break-through work that defines Ms. McCray as a force to be reckoned with in the field of historical/thrillers. This exploration into the religious realm, combined with the military and historical elements place her in the company of Rollins, Berry and Brown.

Special Note: This Tuesday 1/10 is the release of Preston/Child’s new installment in the Gideon Crew series entitled Gideon’s Corpse. I will be attending a rare book-signing by both Douglas Preston and Lincoln Child this Thursday in Princeton NJ. If you have any questions, comment on this blog and I will confront them face to face.
Posted by Thriller Rock Twitter at 11:34 AM 2 comments: