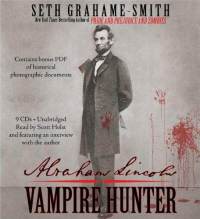 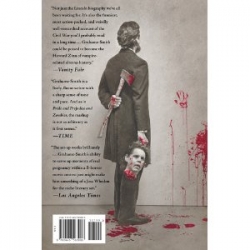 Growing up, I was a connoisseur of horror films, often gravitating toward the quirkily titled hoping to find a petunia in the onion patch. I endured dozens of clunkers like Jesse James meets Frankenstein’s Daughter, The Thing With Two Heads and Invasion of the Bee Girls for every gem like Blood Splattered Bride. These films rarely terrified but would entertain with a combination cleverness and, often, unintentional humor. Therefore while perusing the aisles of Barnes and Noble,  I could not help but be attracted to a book titled Abraham Lincoln: Vampire Hunter featuring an iconic black and white photo of Lincoln with red, bloody hand prints trying to conceal an axe behind his back. Could this be the book equivalent of those horror film favorites of my youth?
Abraham Lincoln: Vampire Hunter is Seth Grahame-Smith’s follow-up to his best selling debut Pride and Prejudice and Zombies. Being neither a fan of Jane Austin nor literary zombies, I passed on Grahame-Smith’s first attempt. Still I have always had a soft spot in my heart for vampires, so I gave Abe a chance.
The story begins when a struggling writer is given journals by a mysterious patron and is asked to create a manuscript from them. The books are penned by Lincoln and describe his life-long mission to destroy vampires, after realizing his mother was a victim of the creatures. Under the tutelage of a vampire turncoat named Henry, Abe destroys a gaggle of blood-drinkers while becoming embroiled in politics. The nation is on the brink of a civil war which was brought about by the vampires themselves to keep slavery, a valuable source of nourishment. Along the way, Abe befriends Edgar Allen Poe, debates Stephen Douglas and fails to assassinate Jefferson Davis before the War.
Grahame-Smith has crafted a well written story that truly captures the voice of Lincoln and the nineteenth century speech. He has thoroughly researched his subject and weaves fact and fiction so well it becomes difficult to differentiate between the two. The introspective nature Lincoln’s journal conveys struggles with loss and depression even contemplations of suicide. This is a serious work and this is where I have my reservations about the book.
I was incorrect with my expectation of levity, but the title seems to indicate a level of non-seriousness. I did find myself, however, drawn into the story and wondering how Grahame-Smith would skew the various accomplishments of Lincoln life toward the supernatural. The read is engrossing if ultimately unfulfilling, due mostly to my ill-conceived prejudgment.
While researching this blog, I discovered that Abraham Lincoln: Vampire Hunter is in production and will be a major release next summer, with blockbuster aspirations. If they stay true to the book, I know not to expect a campy horror film but, if they want fannies in the seats, I suggest balancing the fear factor with deliberate absurdity. The Lost Boys does this exquisitely and I suggest the filmmakers inject some farcical elements into the secondary characters while Lincoln stays true to Grahame-Smith’s original vision. I would love to add Abraham Lincoln: Vampire Hunter to my list of all-time favorite horror films right behind Children Shouldn’t Play With Dead Things, I Bury The Living and Blood on Satan’s Claw.
Posted by Thriller Rock Twitter at 10:36 PM 1 comment:

In the spring of 1971,  I was twelve and sitting with my friend Randy in a dark Suffern, NY movie theater. We were two boys who couldn’t sit still in school, yet neither of us had moved in over an hour. I felt the blood rush from my face and my mouth was agape at the action unfolding on the screen. As the rolling credits snapped me back to my senses, we excitedly discussed what we had seen, debating the merits of the film and the scientific implications of the extra-terrestrial virus code named The Andromeda Strain. For Randy it was a cool movie, for me it altered my choices in film and, more importantly, in books. I couldn’t wait to get my hands on the Michael Crichton novel.
For me, Crichton is the father of the medical/techno-thriller. While I explored science fiction and mystery on page and screen, I found myself returning time and again to this genre often not knowing the influence of Crichton. My favorite film of 1973 was Westworld, where a “Disneyland” for grown-ups, populated by androids goes horribly wrong. Later, I would realize the movie was written and directed by Crichton. He also adapted  and directed Robin Cook’s medical thriller Coma.
Crichton used his medical background, a M.D. from Harvard, as well as his undergraduate major in Physical Anthropology, to write with authenticity and create some of the most innovative thrillers of the last forty years. Whether using biotechnology to create dinosaurs in Jurassic Park (1990), nanotechnology in Prey (2002) or genetically modified organisms in Next (2006), Crichton has had his finger on the pulse of the next big push in science, as well as what could possibly go wrong, often through corporate greed or negligence. The take-away message from many of his novels seems to be proceed with caution.
Perhaps Crichton should have taken his own advice before State of Fear (2004), a thriller about global warming and eco-terrorism. His selective use of research in casting doubts concerning global warming caused an uproar in the scientific community. While the Appendix cautioned against politicizing science by drawing comparisons to the eugenics program of Nazi Germany and Lysenkoism or agrobiology of the Soviets, the novel led to serious, polarized debates, the exact thing Crichton warned against.
Michael Crichton died three years ago at the age of 66. Pirate Latitudes was completed at the time and was published a year later. Also found on his computer was Micro, a thriller that was a third of the way written. There were notes and a character list with descriptions. Richard Preston, a master of scientific thrillers including The Hot Zone, was selected to complete Crichton’s original vision. The novel will be released on November 22 and I hope it will be a fitting finale to a remarkable career.
Posted by Thriller Rock Twitter at 6:17 PM No comments:

A Tenuous Trek: From Book to Big Screen By @mrneil98 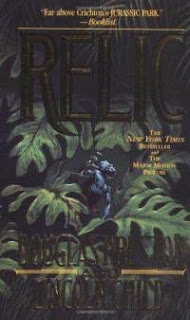 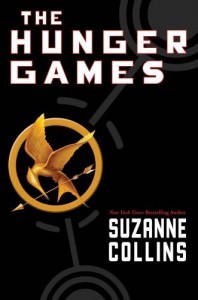 Encouraged by my adult daughter, who tore through the Suzanne Collins trilogy in less than a week, I read The Hunger Games and found myself completely engrossed by the struggles of protagonist, Katniss Everdeen. I found the tale a fine balance between action and tension, triumph and heartbreak, all within 275 pages. Evidence of my true feeling for the book was the period of time between completion and purchase of the sequel, Catching Fire, -- about two minutes! However, my haste did not entirely stem from enthusiasm, but was expedited by that abhorred news my daughter broke, “They are turning it into a movie.”
Among the ultimate goals of many authors are a position on the prestigious New York Times Bestsellers List, and a financially rewarding movie deal. As a reader, I dread having one of my favorite novels turned into a film. Over the next few years I will apprehensively await a Sigma Force film based on James Rollins’ series, a Gideon Crew film based on a Preston/Child book and a TV series based on David Baldacci’s King/Maxwell series. My hopes will rise as the release date approaches only to be dashed, like so many times before. Let’s face it; Hollywood has a poor track record for converting print to film, with few exceptions.
Case in point, Relic by Douglas Preston and Lincoln Child. For those unfamiliar with the novel, it introduces Aloysius Pendergast in a classic murder mystery with monstrous overtones set in the Museum of Natural History in New York, a locale frequently used by Preston/Child. Hollywood’s first alteration was to change the title to The Relic, minor at first appearance but the original had multiple meanings where the film title is a singular object. Their next mistake was to relocate the film to the Natural History Museum of Chicago, a nice museum but it felt wrong when you consider the significance of the NYC’s Museum of Natural History in the conceptualization of the novel. (Preston formerly worked at MNH and had an after-hours excursion with Child that inspired the novel) Even so, the most grievous error by the filmmakers was the elimination of several characters including; Bill Smithback, a writer featured in half a dozen books and Pendergast himself!
There are numerous other examples of thrillers that did not translate well to the big screen. The DaVinci Code and Angels and Demons were completely unconvincing and held none of the novel’s suspense. Sahara was the second failed attempt at filming a Clive Cussler’s Dirk Pitt adventure, after the long forgotten Raise the Titanic. Kubrick’s The Shining made me angry and Pet Sematary made me walk out of the theater. Shutter Island, however, was closer to my vision of Dennis Lehane’s creepy manuscript, and was consequently more enjoyable. And perhaps this is where the problem lies; my vision.
When I am enjoying a book, I am watching a film in my mind. When the action on the big screen differs greatly from what I’ve imagined, I have a difficult time accepting another’s vision. Similarly, the casting can shine a negative light prescreening, as was the case of Tom Hanks playing Robert Langdon or Steve Zahn as Dirk Pitt’s sidekick, Al Giordino. Perhaps I am too harsh a critic and I know that it is hard to get everything right.  The film Silence of the Lambs, however,  gives me a tenuous hope for these upcoming releases.
As I watch the recently released teaser trailer for The Hunger Games, I can feel that little seed of hope growing, but I will try not to let my expectations get the better of me. Still, it would be nice to leave the theater saying, “Yeah, that’s how I saw it!”
Posted by Thriller Rock Twitter at 7:43 PM 1 comment:

Is This Labor Day or Christmas? by @mrneil98 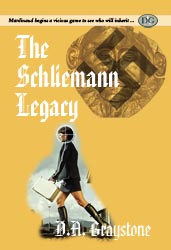 I look at my calendar and check my PDA just to be certain. No, this is the beginning of September not the end of December. This is not an aberration, it must be the Indie Book Blowout! I had recently seen the posts on Twitter but was reticent  about inquiring until I realized I needed new reading material. I have difficulty reaching out to new authors and leaving my comfort zone.
Out of curiosity or desperation, I click on the link and peruse the titles offered. I select Pandora’s Grave by Stephen England and The Schliemann Legacy by D. A. Graystone. Hundreds of pages of thrills and entertainment for a total of $2.12. What the heck? I just paid $11 to be marginally entertained by Don’t Be Afraid Of The Dark for less than two hours but these two book will engage me for about ten hours each!
There is no better way to end the summer than a visit to the Indie Book Blowout. As a potential author, I recognize the time and effort necessary to produce a novel. To make it available for $.99 is a way of telling the reader that their effort is more about the product than the profit.  Although if you like this one for $.99.…….
Posted by Thriller Rock Twitter at 9:24 PM 1 comment: