Perigee is a science fiction thriller and the first of hopefully many offerings from new author Patrick Chiles. It is an eloquent work of near future science fiction. The writer's clarity and ability to present a fair amount of technical information without confusing the reader is commendable. In fact, I believe the quality of writing may be the novel's greatest strength.


Closer to hard science fiction than thriller, Perigee is the story of a potential disaster in the sub space air travel industry when passenger craft, the Austral Clipper, experiences technical failure and is marooned in orbit. When a daring rescue attempt fails, the crew is faced with dwindling options and desperate passengers, one of whom becomes problematic. In places, the story has elements of suspense particularly when building up the industrial espionage and sabotage aspects of it.


For me, the story was slow to develop but worth it in the end. In the final third of the book  the pace picked up and a few more connections could be made. I would have preferred more action in the story and less of the realistic sounding character interactions, as odd as that seems. Given the author's background I have no doubt the technical conversations and various government agency involvements make for an authentic reading experience. Unfortunately, I found that the jargon and feeling of being right in the middle of planning and operation type discussions just didn't hold my interest. It's entirely a personal preference and readers of hard fiction, or those more familiar with the aeronautical field might find this a thoroughly enjoyable read. The technical descriptions were fascinating and the casual toned author's note at the end was almost as interesting as the story.


Throughout the novel the writing was superb and based on the quality, this book would easily rate between four and five stars. However, most book review ratings are based on personal preference and how much the reader liked the story. In that respect, for me it was less. I still think it would be a highly worthwhile read for technically inclined science fiction fans.


Find it:On KindleIn print: Amazon
Posted by Unknown at 1:02 AM No comments:

"Enemy in Blue" by Derek Blass 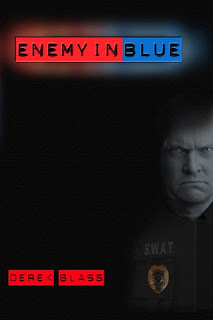 Do you know who your enemy is?
The streets aren't safe when your enemy wears a blue uniform and a gold badge.
What if the good guys weren't good?
What if a cop went rogue and killed an innocent man?
What if it was all caught on video and the cop would do anything to cover it up?
Chase this lawless cop through the streets and to a scintillating series of showdowns with Cruz Marquez, a young attorney trying to nail down his enemy in blue.

Will justice be served?
With the opening of “Enemy In Blue”, Blass grabs hold of you and doesn’t let go until the last page, and even then, well, let’s just I have no doubt readers will be glad there’s a follow up coming out!
Shaver is a corrupt police officer who has literally been getting away with murder. After a police raid gone horribly wrong, Shaver is determined to cover up the murder he committed, killing an innocent man in front of his family. What ensues is a high speed, intense chase where they good guys are fighting to keep the evidence and of course, Shaver and his cronies are intent on covering up all the loose ends.
The second half of the book is the trial of Shaver and that’s where we really get to know Cruz, our young Latino lawyer protagonist. Throughout the trial, the action slows some, but still the plot twists and turns should keep you on your toes, and wondering what happens next.
A couple of points to take note of.

The long and short of this review is that yes, this book is controversial, it will make you think and that might make you angry, or upset, or even shock you. Still though, I would give it a 5 star rating because of those very things. A book should make us think, and that’s exactly what Enemy in Blue does.
This book is for those who love police procedurals, John Grisham style court room thrillers, and people who love a good controversy.


Enemy in Blue on Amazon- http://amzn.to/TRT2EIB
Reviewed by Shannon Mayer
Twitter @TheShannonMayer
Blog: Http://shannonmayer.blogspot.com
Posted by Unknown at 10:07 AM No comments:

Two friends searching for an ancient gold mine team up with a young drifter and a beautiful Bureau of Land Management agent to face the challenges of this mysterious and deadly place. Drug runners, illegal aliens, civilian militia, severe weather and white supremacist bikers all pose as obstacles on their treasure hunt.


And just to make things interesting, they also have to contend with the legendary Chupacabra, the blood sucking beast of the desert.


If you enjoy the thrill of surprise, The Devil's Highway might just be the book for you. One thing I have to say about this novel is: it was full of surprises. When I picked it up, I half expected another buddy-buddy road trip adventure-slash-treasure hunt to unfold. I was woefully mistaken. The one thing it isn't is another buddy road trip adventure. It's something else entirely.
Other than being a thriller, The Devil's Highway defies sub genre classification. What can I say about it? The story just contains so much of nearly everything. I'll try not to give away too many details, but this story had it all. From urban explorers to the white supremacist biker gang, a Chupacabra, illegal immigrants, unexpected heroes, unexpected villains, militia, federales, techno-gadgetry, drug running, white slavery, gold mining, robots... there was even a British guy. Something new was always just around the next page.
This is the kind of novel that would be enjoyed by a reader who loves to keep track of intricate plot twisting and a variety of characters with a multitude of motives. There were many characters, each of them rich with their own histories. There were fascinating injections of culture and technology. The pace was fast, sometimes racing along at break-neck speed.
The Devil's Highway is a book that will appeal to readers who enjoy action thrillers and are not put off by violence and difficult themes. For me personally, the violence and subject matter wore me down at points. I was grateful the author handled those parts professionally and avoided graphic detail. However, I think for many readers this would be a four or five star book. In all honesty, my own rating would be between a three and a four. Of course with rounding, it gets four on most book review rating systems.
The Devil's Highway e-book is currently available On Amazon for $3.99. It's well priced I think. The book is long and there is a lot of story in it for the reader's money.


Related articles
Something has to happen (thedarksalon.blogspot.com)
Book Review: How to Ravish a Rake by Vicky Dreiling (oh-my-books.blogspot.com) 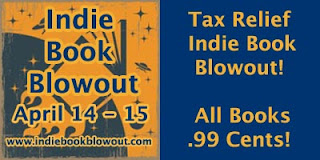 How about 13 GREAT books? 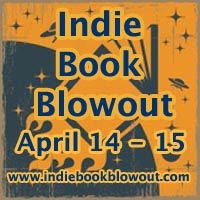 Go to our website to see all the great books and sign up to win a FREE Kindle!

Bummed about Friday the 13th?
About Paying your Taxes?
Join us April 13th for 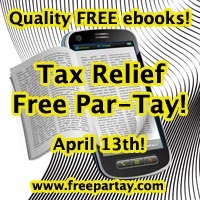 Welcome to Tax Relief Free Par-Tay,
A party for readers! 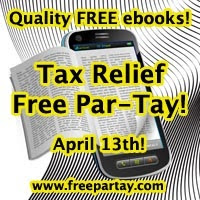 Go to our website to see all the great books and sign up to win a FREE
Kindle!