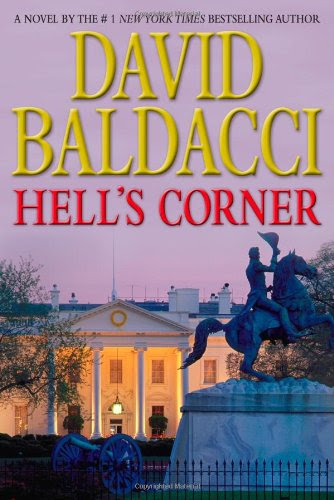 There are certain authors that when their names come up, thriller lovers sit up and take notice.  Baldacci has definitely become one of those names.  Hell's Corner delivers on all the unstated promises of suspense, intrigue and... of course... thrills that have been a hallmark of Baldacci's writing from the get-go.

For the thriller readers, this is one of those no-brainers.  Of course you should read it.  Oliver Stone and his Camel Club are wonderful characters to revisit and this novel takes them to some new and interesting places.  It's a real rip-snorter of a book that will zip you along to its conclusion.  The premise is a stretch, and there are some characterizations that seem decidedly un-Baldacci-ish, but he remains a masterful story-spinner.  You may not fall in love with this novel as much as some of his others, but you'll see that it earns the money you put down for it.

The rest of you out there (you know who you are), may not find this a good place to enter into the Baldacci ocean if you haven't already tested those waters already.  Work your way up to this novel by reading other Camel Club novels first.  The genesis of the series is called, appropriately enough, The Camel Club.  In my estimation, though, Stone Cold is the best of the bunch.  They're fun, they're well-plotted and the characters aren't all dark-haired and chisel-featured supermen.  The Camel Club is made up of the aging and the infirm, with a lot of interesting little quirks that keep them lively and engaging.

So, if you're a thriller lover, this one needs to be on your to-read list if you haven't gobbled it up already.  If you're not, ease yourself into the series by reading Stone Cold first.  Hell's Corner is available here.
Posted by Thriller Rock Twitter at 4:02 PM 2 comments:

"The Emperor's Tomb" by Steve Berry, reviewed by @mrneil98

We brought back @mrneil98 to review this novel for us, because he's a huge Berry fan and because he's just stinkin' awesome! 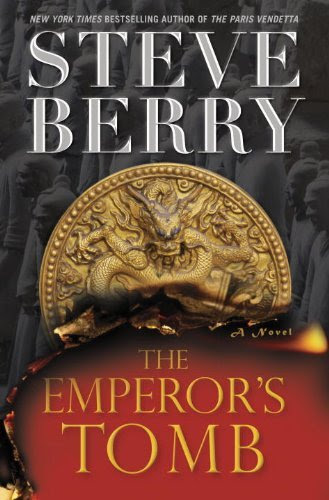 If you’re looking for the perfect holiday gift do I have the book for you. For me it was a belated birthday with the release of one of my favorite author’s new novel, The Emperor’s Tomb. It had been over a year since his last, The Paris Vendetta but my appetite had been partially appeased in September with the release of Balkan Escape, a short story e-book that acted as a prequel to Emperor’s Tomb introducing a key character, Lev Sokolov, and establishing a debt owed by Cassiopeia Vitt.

Berry has again delivered a classic Cotton Malone action thriller with exotic settings and loaded with historic facts. This time though, he takes a risk by making Malone and his gang secondary players to the main crux of the story, a power struggle for leadership of China. I was surprised early in the novel when so much of the focus dealt with ministers Karl Tang, a ruthless traditionalist and the more liberal Ni Yong and a third party, the mysterious Pau Wen. Tang and Yong were leading contenders for Primer of China once the aging present ruler stepped down. Pau Wen seems to be working for and against both but his motives are never fully revealed.

There are more twists in the Emperor‘s Tomb than a pound of rotini. Aside from the triangular power struggle for control of China, there is a triangular struggle for Lev Sokolov and his knowledge of “infinite oil” between the Americans, the Russians and the Chinese. The usual cast has reassembled with Malone and Vitt being directed by Stephanie Nell but Viktor Tomas has been reintroduced to confuse things. Tomas was from the last book, and was working against Malone then switched sides. Here he is working every side but is also developing into a rival for Cassiopeia’s attention.

Although the majority of the novel takes place in China, the reader is first treated to tours of Copenhagen and Antwerp, described in detail that can only come from first hand experience. After a brief stop in Vietnam, the remainder of the book spans the vast and varied Chinese landscape focusing a great deal on the history and politics of this mysterious nation. The center piece is the tomb of the first emperor Qin Shi buried with his army of thousands of terra cotta warriors, chariots and horses. I was surprised after reading the notes and a few interviews that Steve Berry had never been to China but he does own a life-sized replica of a terra cotta soldier.

As always Berry fills his novels with meticulously researched details about Chinese history and culture and I couldn’t wait to finish the book just to read the author’s notes sorting out the fact from the fiction. I also enjoyed the map of Asia on the first pages with key cities highlighted and found myself referring back to it time and time again during the book. Reading The Emperor’s Tomb was like visiting friends. The characters have become such a part of my reading world it was just catching up on their latest exploits.

May I wish you all a Berry Merry Christmas and encourage you all to join Malone’s Clones.
Posted by Thriller Rock Twitter at 6:22 PM No comments:

I love getting to review thriller novels by strong women that have strong women as the protagonist of their books.  So, I guess you could say that I'm a happy camper right about now.

If you're a thriller reader already, I probably don't need to introduce Ms. Cornwell to you.  If I do, then all I have to say to you is...WHAT???  You need to be reading this stuff!  Seriously.  This book has got all the bells and whistles, which is sometimes code for a lot of research but not a lot of oomph between the front and back flaps.  That, fortunately, is not the case here.  Cornwell knocks it out of the park, once more.  Loads of cool new toys, fascinating murders, suspense and intrigue make this another strong entry in the Scarpetta series.  Is it any surprise that Angelina Jolie has signed on to play the inimitable Kay Scarpetta herself?  Yowza!

Now, if you're one of those convince-me-that-I-should-read-this-thriller types, wipe that look of skepticism from off your lovely face.  This novel sees a return to the first-person narrative style that was a hallmark of the earlier Scarpetta novels.  This puts us into her mind, and it's a fascinatingly flawed one.  Strong, opinionated, and possibly a bit paranoid, Kay Scarpetta is worthy of the dynasty she's spawned.  Plus, there's all sorts of interpersonal dynamics happening with Benton that will keep your interest piqued if grisly murders don't do it for you.

So...what are you waiting for?  Go check the sucker out!  You can find it here.  You'll see that the reviews are pretty overwhelmingly positive.  Most of the negatives have nothing to do with the book and everything to do with the price of the Kindle version.  Hmmmm.  There may be a reason her publisher feels they can charge that much.  #justsayin'
Posted by Thriller Rock Twitter at 6:06 PM No comments: